A Tale of Two Cities
(OK, a City/County and a Village) 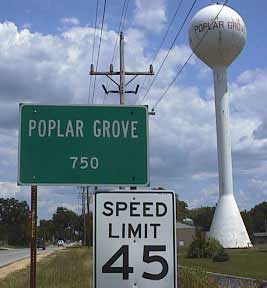 People always ask why the name on one of our hangar roofs is “Belvidere,” and the airport is named”Poplar Grove Airport.” This question always brings a smile to airport owner Steve Thomas’ face, and the following story.

The airport was once known as Belvidere Airport. When the idea of developing a residential subdivision on the airport was in the planning stage, Steve went to Boone County and the city of Belvidere for approval to move forward with the project. For whatever reasons, they denied his request for rezoning a portion of the airport’s property as “residential.”

Like many rural communities, people here sometime have more than one job. It just so happened that our postman was also the mayor of the nearby village ofPoplar Grove. In conversation one day, Steve asked “his honor” if Poplar Grove would be interested in annexing the airport into the village and then rezoning the requested property. The answer was “yes,” but the land owners between the village and airport would also have to agree to be annexed to maintain the village’s contiguous boundary. 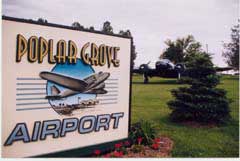 Through a tremendous amount of effort and cooperation, a plan was established that benefited the village, our fellow land owners and the airport. When the annexation plan was approved, the village of Poplar Grove virtually doubled in area overnight!

The success of Poplar Grove Airport and Bel Air Estates is now well known, and the sign in our front yard is a tribute to the village and our neighbors who dared to share the dream.