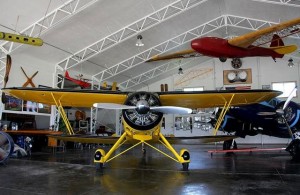 POPLAR GROVE — In the 1960s, the world was changing steadily. In the countryside of Boone County, things weren’t much different.

Side-by-side, dairy farmer Dick Thomas and his son, Steve, tended to cows and worked the land that had been in their family since the 1800s.

A fellow farmer came by to purchase an outbuilding from Dick in 1967. Rather than come up the lane in a pickup truck, he arrived in a small craft airplane, landing alongside the pasture.

“He took me up for a ride. I was 15. I said, ‘Ooh! This is it! This is a whole new world.’ And it seemed more exciting and more fun than milking cows, baling hay and shoveling manure,” Steve said.

From that moment forward, flying would become an instrumental part of his life.

His father also was bit by the bug. Their mutual and instant attraction to flight got the wheels rolling and in 1972, using a portion of the farmland, Dick opened the first airport in Boone County.

Both received their pilot’s license and learned the ins and outs of running a successful small airport.

The lay of the land has changed dramatically. The two cattle sheds became hangars, the fields became runways, and the fresh dairy air has given way to flight patterns with contrails.

Dick sold the property to Steve, and over time, it was annexed and Belvidere Airport got more than a new name.

Poplar Grove Airport has since grown into a complete aeronautics community.

“We have customers we ship to as far away as Guam, Indonesia and Korea,” he said.

Bordering the outskirts as well is Bel Air Estates, a subdivision where residents have access to runways adjacent to their driveways. They have hangars next to their garages, all of which was another one of Steve’s visions that came to fruition.

There is also a flight school at the airport where students as young as 14 can learn to fly.

“We have lots of past students who became instructors and are now captains for major airlines,” Steve said. “One of our instructors now looks to be headed in that direction, too.”

His wife, Tina, who he met in college, was studying to be a nurse. He took her up for her first flight in 1975. She ended up falling head-over-heels in love, and not just with Steve. By 1976, she had her pilot’s license.

Poplar Grove Airport is rapidly gaining a reputation for being the airport of choice for aviators in the greater Chicago and southern Wisconsin area. The reason is very simple. We've made a conscious decision to forgo the more traditional approach of trying to attract business aviation customers and focus on creating a fun, friendly, neighborhood atmosphere for people who are in aviation for the pure fun of it. When people fondly talk about the way flying and airports "used to be," they need look no further than Poplar Grove Airport to get that old familiar smile put back on their face. While we actively promote the fun atmosphere of the past, we haven't lost sight of the fact our customers expect a high level of modern services. Poplar Grove Airmotive, which shares common ownership with the airport, operates the airport and its various support services. We have a full service FBO with a friendly staff ready to handle your needs. We also have a modern, 20,000+ sq.ft. maintenance facility which includes an airframe shop, engine overhaul shop and accessory overhaul shop. Your first visit to our airport will show you that a modern facility teamed with good, "old fashioned" service is truly a winning combination. We are committed to the future of general aviation, and we help promote that future by operating an active flight school. Our flight school is comprised of 5 full-time, certified instructors and a fleet of well maintained rental aircraft that includes conventional Cessna 152 and 172 trainers, as well as a Piper J-3 Cub and Cessna 140 for those who prefer to learn in a "taildragger." The airport's main 4,000-foot hard-surface runway is complemented by two grass runways, both 2,500' long by 150' wide, which provide a safe environment for learning flying skills in the aircraft of your choice. Poplar Grove airport is the place to earn your wings. With pristine grass runways as well as the traditional asphalt runways Poplar Grove gives the student a well rounded aviation education experience. Our students learn from highly trained FAA Certified Flight Instructors. Choose from Tail wheel to Retractable Wheel aircraft. Come by the Grove and see the difference. Intro flight's start at $80 and are logable toward your license. Come fly with us! Take some time and look around our site. We have tried to make it just like the airport; friendly and fun. If you have any comments or suggestions, please feel free to e-mail us, give us a call, or use the method we like best: stop by and visit us in person!
MAIN MENU